Hello loyal readers! I recently had the opportunity to talk with Melissa Hiller, who is the Curator of the American Jewish Museum, located in Squirrel Hill’s Jewish Community Center! Melissa has served in this position since 2008.

The JCC is a special place to me because I used to perform in plays there. Really good plays too! But that’s not what this interview is about. THIS interview is an opportunity to learn more about Ms. Hiller, who is making such an important contribution to Pittsburgh’s cultural scene, and to learn more about the AJM’s current exhibit, based on the Funnyman comic strip produced in 1948 by the creators of Superman, Joe Siegel and Jerry Shuster! Here's a link to info on the museum, and the exhibit:

When Siegel and Shuster sold the first Superman story to Detective Comics in 1938, they relinquished the rights for a TOTAL of $130.00. That was it. Though they were paid for their work on the Superman strip for years, this was nominal and they never enjoyed significant profits from this worldwide phenomenon until much, much later in their lives. They lived like paupers and Funnyman – a "superhero" who relied on humor to fight crime – was their last attempt to produce a comic together. This time, they retained the rights.

By all accounts the exhibit is compelling and I will be giving a talk at the museum on a related topic on March 18th.   More on that to come though – this article is about my GREAT discussion with the woman who made the exhibit happen – Ms. Melissa Hiller! We talked about the museum, the exhibit, and about Pittsburgh. Of course we discussed Mineo’s Pizza and its so-called “competitors” – that goes without saying – but we also had QUITE the illuminating conversation about favorite sports teams in Pittsburgh! Here you go – enjoy!

Monte: Thank you very much for finding some time to talk with me!

Melissa: Good afternoon! I am happy to talk about the museum and the exhibit!

Monte: Well, tell me a little about the American Jewish Museum.

Melissa: The American Jewish Museum (AJM) has been in Pittsburgh for about 15 years.  We chose the name when the Council of American Jewish Museums was born – a consortium of professionals who support Jewish organizations that have historic or archival collections.  They help to ensure that Jewish museums function professionally.  This was before I was at the museum, but as I understand it, we were advised to begin our name with the letter A – so we’d be first on every list!  Before that we were an unaccredited gallery in the JCC. So it was a big deal when in 1997 we became the AJM.

Monte: You mentioned that the museum has been around for some time. How did you change it?

Melissa: Well, my predecessor did an AMAZING job here. Her focus was on ideas related to art and social justice.  For example, she did an exhibit on Nazi persecution of homosexuals. She did an incredible job here, and my focus is not to change the museum, but to focus on more contemporary artists – emerging ones, more mature ones seeking broader exposure and opportunities.  In 2011 we did an exhibit called Too Shallow For Diving – 14 artists examined issues surrounding water. The artists explored the aesthetics of water but also more politically motivated themes.

We also did an exhibit called A Painter’s Legacy: The Students of Samuel Rosenberg (note: Samuel Rosenberg is a revered artist and teacher who taught for years at Carnegie Mellon University).  About 40 artists, with over 70 pieces of art exhibited.  It was a really moving tribute to the artists who began as Rosenberg’s students but over time became his friends.  His students had extraordinary reverence and love for him.  Andy Warhol was one of his students.

Monte: In your current capacity do you communicate much and work with the other museums in Pittsburgh – such as the Andy Warhol museum and the others?

Melissa: In Pittsburgh there is a very effective mechanism called the Greater Pittsburgh Arts Council.  AJM belongs to it.  GPAC does a phenomenal job in helping the museums with strategic planning, coordination, and the like.  So we all try to get out of our silos.  But it’s not always easy to do! My colleagues know what I do here. I’m small – not like Carnegie or the Warhol.  So I’m fortunate to be part of GPAC and I have excellent relations with the other museums in town.

Monte: What drove you to art history?

Melissa: I had a really good teacher in college. I was just drawn to the way that art history gives an understanding of how the world is – through sociology, history, philosophy.  I always found that so interesting.  I am very lucky and appreciative – I get to think about so many interesting, intellectually stimulating things, and get paid for it!

Monte: How did you end up at the Museum?

Melissa: I have a degree in art history from the University of Pittsburgh, though I am originally from Lancaster. I grew up in the throes of rural Pennsylvania! But I came here for college, and I went to graduate school at the Center for Curatorial Studies at Bard College.  My husband and I found ourselves in New York for a while, but we always loved and missed Pittsburgh. He’s also a Pitt grad.

Monte: So you came to Pittsburgh, even before you had a position lined up?

Melissa: We were at a point in our lives where we could settle in, but we were able to have our cake and eat it too!

Monte: What neighborhood did you move to?

Monte: Greenfield! That’s just minutes from where I grew up in Squirrel Hill! Hey, have you ever eaten at Big Jim’s in the Run?

Melissa: My friend owns it!

Monte: Seriously? My friends and I used to eat there all the time in college and for a few years after that!  So have you ever eaten there? Are the sandwiches still massive?

Melissa: So there really was a Big Jim?

MONTE: Oh yeah! That’s why the sandwiches were so big! To Big Jim, they were just normal!

MELISSA: You know, that’s one of the great things we love about Pittsburgh.  Pittsburgh has a lot of FANTASTIC restaurants in it! There’s everything – Taiwanese, Thai, Korean…when I was here in school, it was completely different. It’s really changed!

MONTE: And the pizza is still great! So let me ask you: what’s YOUR favorite: Mineo’s, Aiello’s, Vincent’s, or some other?

MELISSA: There’s only one appropriate answer – Mineo’s, of course!

MELISSA: I don’t know what it is, it’s the crust, the cheese, the sauce – it’s everything!

MONTE: I love the way after about 10 minutes, it all congeals into this incredible taste!

MELISSA: People here are rabid about their pizza!

MONTE: Have you ever tried any of the others – like Vincent’s?

MELISSA: No – because I am loyal to Mineo’s!

MONTE: Great answer! Let’s get back to the exhibit. Tell me about Funnyman. 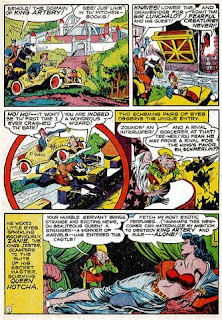 MELISSA:  Well, the owner and publisher of Feral House, which is considered to be a great incendiary underground publication, has family in Pittsburgh. His name is Adam Parfrey.  He owns the artwork from the Funnyman comic, and his family came to me and said it could make for an interesting project.  It just gelled for me.  Funnyman was the last thing Siegel and Shuster ever worked on together.  They were trying to reclaim something that was taken from them from the Superman (experience).  And it failed on them.

As human beings we tend to compare ourselves to others, and we create identities.  They are seen as legends by their peers and the public, and factually, they were.  They were given iconic status, but they were taken, and put in a very powerless position.

It is so interesting to reflect on the dichotomy of human life.

MONTE: Very true. At least some of the artists who followed them learned from them though. Will Eisner (creator of the Spirit), Bob Kane (creator of Batman), and lots of the others really protected themselves.

MELISSA: That’s true, but it didn’t help them until much, much later.  1948 was the last time they ever worked together.  They wanted to preserve their legacy, and they wanted to channel their energies into something more human and autobiographical.  Humor was the common interest.  Siegel had actually written a book about humor.  Shuster loved Danny Kaye, and wanted to do something with him as a character.

Funnyman had the cohesion…they had high hopes.  They retained the rights to it.  They were actually prohibited from saying they were the creators of Superman.

MELISSA. It is. With Funnyman they really tried to invoke a more human kind of character, but 1948 just wasn’t the time for it. It only lasted six issues.

MONTE: If you look at it objectively, what do you think of the quality of the comic?

MELISSA:  I didn’t grow up as a comic book person but the stories hold up.  They follow an arc, they are funny, corny, and drawn well. It works. But the strip was out of time. 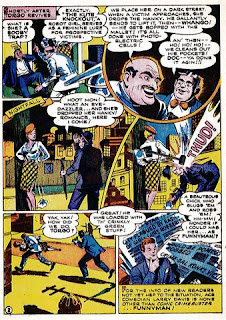 MONTE: They really didn’t receive compensation until the late 1970’s, thanks in large part to the efforts of Jerry Robinson, (the long-time Batman collaborator who helped to negotiate an annual stipend for Siegel and Shuster).

MELISSA: Jerry Robinson is pivotal.  It wouldn’t have happened without him. With the Superman movie coming out, DC didn’t want to deal with the repercussions of any bad publicity.

MONTE: Exactly.  And what kind of response are you getting to the exhibit?

MONTE: A lot of people coming through?

MONTE: It sounds great. Um, any other speakers coming up?

MELISSA: Monte Mallin is coming in to speak! He’s coming March 18 to talk about the incredibly creative influence of Jews in creating and building the comic book industry.  He speaks at 1 PM, right here at the AJM!

MONTE: I’ll be there for that!  I may even do a whole article about that!

MONTE: He will do his best! Now a couple quick questions: Are you familiar with Pittsburgh Dad?

MELISSA: I would LOVE to see Pittsburgh Dad rant about contemporary art! IT would be SO FUN! We’ve heard him rant about his kids, about Gram’s, about the Ravens, about Thanksgiving…it’s time to get him to think existentially about art!

MONTE: That would be great. Sometimes though I think he’s just “dad.” I hear myself saying those things all the time. Of course, I’m from Pittsburgh…

MELISSA: I had to explain the Pittsburgh accent to my mom. She just didn’t get it.

MONTE: I find that when I get in a heated discussion, the accent just seems to come back!  Now, one last question: Can you rate your favorite Pittsburgh sports teams?

MELISSA: I’m a Danny Chew fan. He’s won the Race Across America – twice! The bicyclists have to go from the West Coast to Atlantic City – over 2000 miles – in just nine days.  They spend about 20 hours a day on their bikes! He lives here in Squirrel Hill! He is such a character. His goal is to ride over a milion miles on his bike. He’s over 700,000!

MONTE:  He sounds great and maybe I will interview him. But let me get back to my question – how do you rank the Pens, Steelers, and Pirates in order of preference?

MONTE: All right, well let me help you a little. As a kid, did you ever ice skate?

MONTE: OK, so we’ll put the Pens first, because they invoke sweet memories of your childhood.

MONTE: Now, in general do you tend to cheer for the underdog or the proven winner, the favorite?

MELISSA: I guess so!

MONTE: Then we’ve covered everything! Thank you very, very much! It was great talking to you and I can’t wait to see the exhibit! You’re really interesting and a good sport, and the exhibit sounds great!

MELISSA: Thank YOU! I look forward to meeting you soon!
Posted by Monte at 10:17 PM

Email ThisBlogThis!Share to TwitterShare to FacebookShare to Pinterest
Labels: Judaica, Pittsburgh, The Arts