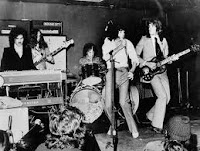 Background: I love Sparks.  They are totally unlike almost all of the other groups I listen to – the Stones, AC/DC, Ramones, Jett, and variants thereof.  Sparks are led by brothers Ron and Russell Mael, and they’ve been producing music together for over 35 years.  People often ask me which Sparks albums they should get to acquaint themselves with the music.  Well, a few albums represented key turning points for the band, or were of such extremely high quality, that they could be deemed “essential” and therefore top the list. So from their 22 albums, here’s my list of ten essentials!  The first seven were highly significant with respect to Sparks’ evolution over the past 40 years.  Three others are discussed because of their extremely high quality, even if they didn’t represent “turning points” per se.

Sparks are fun. Their music always evolves, is unique, and is often challenging.  At the same time, there are constants in their music: Ron’s keyboards driving the melodies; the intricate and elaborate arrangements; Russell’s distinctive singing, in particular his signature (and often stunning) falsetto; and Ron’s songwriting, which has a unique perspective (call it “jaundiced underdog” ) played out in witty, intelligent, and often very funny lyrics. So, enjoy – and explore!

Number One In Heaven (1979). After a couple subpar albums, the brothers regrouped, hooked up with disco producer Giorgio Moroder, and created an album that draws on disco conventions to convey their message in new and groundbreaking ways.  A number of bands (none of which I like at all) point to this album as a major career influence.  One of my all time favorite Sparks tunes – La Dolce Vita – is on this album.  The song closes with the line “life isn’t much but there’s nothing else to do.” When I was going through a miserable period of my life at Boston University in 1979, I saw that phrase graffittied on a tunnel wall.  Someone else was out there that “got it.” I’ll never know who that was, but I will never forget that incident!

Lil’ Beethoven (2002). With their career somewhat on autopilot, Sparks threw all pop conventions out the window and created this modern masterpiece.  Underneath the big production, you can really hear how Sparks construct their music – from the keyboard up. The songs themselves challenge and amaze, and this is considered to be a truly innovative and unique album in music circles.  Note– my friend Jamie and I used to make our friends listen to us perform Sparks songs (early 80s), much to their annoyance.  He played piano and I “sang,” and we essentially did what Sparks actually do themselves on this record – keyboard and vocals, the heart of Sparks.  The difference of course, is that Ron can play piano, and so can Jamie.  Russell can sing…end of comparison.

Angst In My Pants (1982). This is the best of the albums that Sparks made in the 1980s, when they focused on building their American audience.  The production is loud, raw and spontaneous, with songs streaking ahead, one after the other, with little respite.  As with Kimono and Propaganda, the A side of this record is one of the greatest sides of music ever recorded in terms of overall impact.  It is just relentless. Any album that has “Sextown USA” AND “Mickey Mouse” on it is by definition a classic, but the whole album rocks hard and great.  Note – Mickey Mouse is ostensibly about Disney.  My friend Marty thinks it’s really about religion, and I think he’s right. Additional note – this is a GREAT album to drum along to.

Sparks (aka Halfnelson) (1972).  Their first, produced by Todd Rundgren and full of interesting and inventive songs that show Ron and Russell’s great promise.  But it is also a great album in its own right.  Sparks don’t dabble in ballads much (one of the reasons I like them!), but this album has one of my favorites (“Slowboat”).  The careful arrangements, the falsetto, the quirky subject matter and the prominence of the keyboard as the organizing element of the songs are all here. Oddly, produced a top ten hit (“WonderGirl) in Mobile, Alabama.

The Seduction of Ingmar Bergman (2009). Sparks were commissioned to produce a radio musical by Swedish broadcasting, and this was the result. The story line is that due to some odd circumstances Ingmar Bergman finds himself in Hollywood, with promises of fame and fortune – if he’ll make Hollywood-friendly movies. Sparks are working with acclaimed Canadian film maker Guy Maddin to turn this into a film– a medium they’ve often pursued, and one highly compatible with their theatrical sensibility. Really neat piece of work and shows a willingness to continue to stretch in new directions – even after almost 40 years in the business!

Gratuitous Sax and Senseless Violins (1994).  This was Sparks’ first new album after a seven year break from recording.  It features a “techno” approach reliant on Ron’s noodling with synthesizers, although that doesn’t really capture it.  There is great poignancy, great humor all over the place, and great Sparks standards including one which should have been an international hit (“Charlie Parker"). When it first came out I was unenthused. Over time and with repeated listening, however, I’ve come to view this album as good, if not particularly memorable. Note – my least favorite album cover.

And...Three Great Albums!  Heck, you might just want to get these as fast as possible:

Propaganda (1974).  Propaganda followed Kimono My House by just a few months, and builds on Kimono’s sonic style. To me, the concepts are taken to a deeper level – and that’s saying something.  Note – when I was younger, I’d listen to the final song – Bon Voyage, the story of Noah’s Ark, told from the perspective of the animals that didn’t make it on – over and over, mesmerized by the final minute when the instruments all mesh together in a stirring, beautiful, and melancholy crescendo. If music is defined by its ability to move the listener, then this minute defines music.  NOTE: MAY be my favorite Sparks album.

Indiscreet (1975). After wild success in the U.K. with Kimono and Propaganda, Sparks repeated the formula and came up with a third album sounding exactly like the two before it.  Oh wait, that’s what everyone else does.  On this record, Sparks created a set of diverse tunes with only a few straight ahead rockers and many surprises.  Personal highlights are Russell’s ode to Pineapple (“give some to the Alpine ski team…the coach won’t have to worry about the calories…”), and (once again) the closer, a beautiful tune about a couple so dedicated to snuggling that they never make it anywhere on time – and then leave early anyway (“they don’t need a total picture, just a drawing of each other…").  I like to think my own marriage is like that.

Exotic Creatures of the Deep (2008.)  I just love this record. On the surface, it’s typical Sparks stuff – broken relationships, underdogs looking for a break, the usual. But I believe that there is a compelling narrative underlying the music that tells a story of one man’s efforts to fit in with the crowd – with harrowing results. Sparks have never described the album in such terms, but I’m convinced there is hidden depth and meaning here and I highly commend it. A great lyric  – “music or art, one should know from the start” – pretty much captures the essence of Sparks’ long career!

Hope you enjoyed – and I hope you’ll go ahead and start to explore these gems.  And the rest of the catalog ain’t so bad either!
Posted by Monte at 11:26 PM