Introductory Note: I plan to use this blog to sometimes highlight music that I believe is overlooked.  This is the first of those reviews. However, the album in question is one that I have wanted to write about for a long time, and I ended up working on this piece for months, never quite satisfied that I “got it.”  A lot came out because in my mind a lot had to be said!  So please don’t be scared off by its length, and enjoy reading about an often overlooked but essential album by the Rolling Stones! 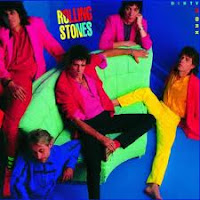 Dirty Work is an often dismissed, usually maligned Rolling Stones album from 1986.  Yet many of the reasons the album is written off are the very one that make it great.  The overall disarray of the band, the feuding between Mick and Keith at the time, and the fact that Keith had to pretty much put the album together on his own all contribute to making this a truly essential, if imperfect, album.

The criticisms of Dirty Work are well known.  Fixated on advancing his solo career, Mick brought little of value to the studio.  Keith’s anger at Mick permeates, and sometimes overwhelms, the whole thing.  The songs are an overproduced mess, with only THREE attributed solely to the famous Jagger-Richards songwriting tandem.  At least three additional percussionists are on the record, covering for a smacked out Charlie.  Wyman barely showed up – Ronnie covered on bass, and on one track (Had It With You), there’s no bass at all!  They didn’t even care enough to add it! what a mess!